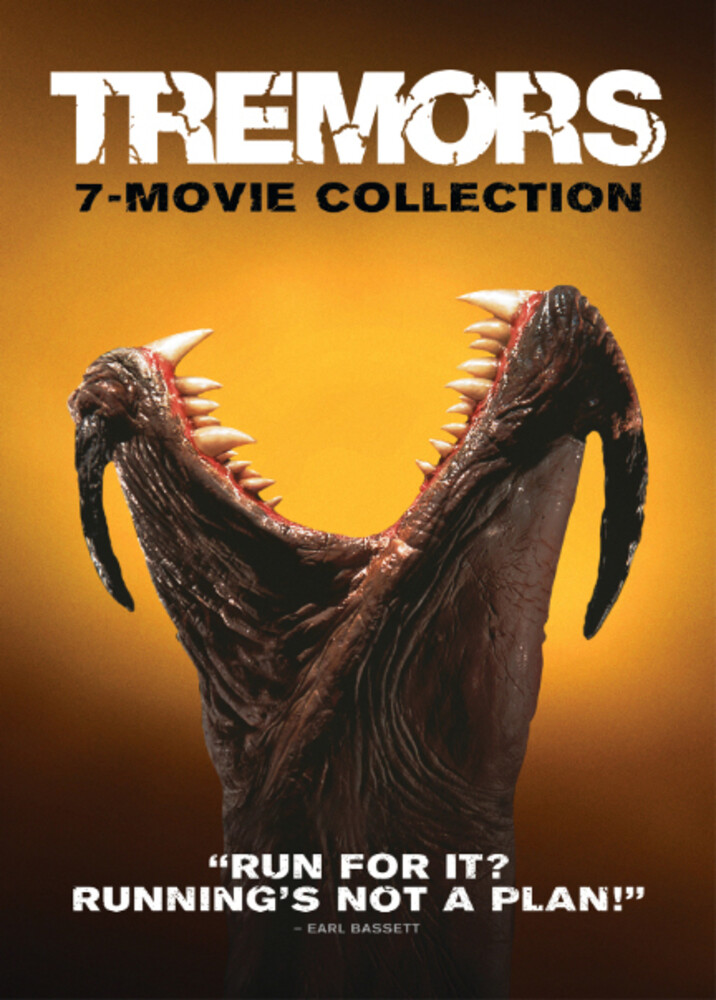 Five-disc set includes: Tremors (1990)An isolated ex-mining settlement in the desert near the Sierra Nevada mountains is the setting for this creepy crawler horror-comedy. Giant mutant, multi-tentacled sandworms-aka "graboids"-lay in wait below ground and devour any living thing lurking above that creates even the slightest vibration. Fred Ward, Kevin Bacon, Michael Gross, and Reba McEntire are among the brave souls up to their necks in tunneling trouble. 96 min. C/Rtg: PG-13 Tremors 2: Aftershocks (1996)When Mexican oil fields are attacked by the burrowing behemoths from the original thriller, veteran "wormhands" Earl Bassett (Fred Ward) and Burt Gummer (Michael Gross) return to take on the creatures and make the worm "turn" permanently. Slithery sequel to the slam-bang cult fave also stars Helen Shaver, Christopher Gartin. 100 min. C/Rtg: PG-13 Tremors 3: Back To Perfection (2001)For the sleepy little desert community of Perfection, Nevada, the last thing the residents needed was a second visit by the gigantic, ground-dwelling "graboids" and their mutant offspring. But once they show up, it's up to gun-toting survivalist Burt Gummer (Michael Gross) to get the townsfolk off the worms' hook. Third entry in the sci-fi series also stars Bobby Jacoby, Barry Livingston, Ariana Richards. 105 min. C/Rtg: PG Tremors 4: The Legend Begins (2003)So, just how did a tiny town in the middle of the Nevada desert become home to the man-eating worm monsters of the first three films? Find out in this prequel set in the 1880s, as a silver mine brings the creatures up from the depths and puts the residents of Rejection Valley in a fight for their lives. Michael Gross, Billy Drago, Sara Botsford star. 101 min. C/Rtg: PG-13 Tremors 5: Bloodlines (2015)Survival expert and seasoned "graboid" hunter Burt Gummer (Michael Gross) is back for more monster-battling fun in this exciting sci-fi sequel. This time, Burt and tech expert Travis Welker (Jamie Kennedy) travel to a South African wildlife reserve where they must face, not only the underground variety of the deadly creatures, but also their more evolved, winged brethren. With Natalie Becker, Lawrence Joffe, Ernest Ndhlovu. 99 min. C/Rtg: PG-13 Tremors: A Cold Day In Hell (2018)In the action-packed sixth installment in the long-running sci-fi franchise, survivalist Burt Gummer (Michael Gross) and his son, Travis Welker (Jamie Kennedy), are dispatched to an Arctic research station to help deal with a "graboid" threat, only to discover that the subterranean beasts are somehow being weaponized. And when Burt is bitten by one of the monsters, he only has 48 hours before the venom puts HIM underground. With Tanya van Graan, Stephanie Schildknecht, Greg Kriek. 98 min. C/Rtg: PG-13 Tremors: Shrieker Island (2020)If Burt Gummer (Michael Gross) thought his "graboid"-battling days were behind him, he'd better think again. Grudgingly recruited to help the staff of a remote island research station that's under attack from the mammoth monsters, Gummer finds himself up against graboids that have been genetically modified by rich big game hunters looking for the perfect prey. Jon Heder, Jackie Cruz, Caroline Langrishe also star in the thrilling seventh chapter in the "Tremors" saga. 103 min. C/Rtg: PG-13